Year-end lists abound, but whenÂ Andy SturdevantÂ asked me to carve out a little bit of the â€œHeavy 100â€ for Salon Saloonâ€™s â€œThe 2012 Showâ€ a few things leaped immediately to mind. The first, of course, wasÂ Brian Beattyâ€™s beard. 2012 was definitely its best year ever. (And 2013 bodes well.) Another wasÂ Andy DuCettâ€™s tour-de-force exhibit â€œWhy We Do Thisâ€ at theÂ The Soap Factory. Iâ€™ve never had more fun at the Soap Factory, never bought anything there before, and never left with a such a strong resolution to return and see an exhibit again â€” and again. The depth and breadth of the exhibit was exhilarating. The space will always be Andyâ€™s in some way for me from now on. In a different way, almost the opposite way, a little book hit me where it hurts this year â€”Â Little Brown Mushroomâ€™s collaboration between one Lester B. Morrison andÂ Brad Zellar, â€œHouse of Coates.â€ Reading it (no Kindle edition, sorry folks), I could almost sense Lester lurking somewhere nearby, with his disposable camera, wearing a disposable wardrobe, making disposable love in a world that so desperately needs a sense of permanence. An even smaller book, but one with just as big a heart, was a late arrival to me this year: 2d Cloud‘s â€œStartled Maggieâ€ by Meghan Hogan and Raighne Hogan.Â Itâ€™s the sweetly penciled story of a dear little â€œspit-fireâ€ of a girl whoâ€™s just learning to talk and draw and read and write, with the help of her mom and her dad, all of whom learn about each other together in real time. If you can read this post, youâ€™ve been there in one way or another, and it was heartening to revisit that time of life. Finally, this was a great year for Minnesota novelists. Two of the best won the National Book Award,Â Louise Erdrich forÂ The Round HouseÂ andÂ Will Alexander forÂ Goblin Secrets. (And yes, I have the Kindle editions of both. Sorry paper!) Anyway, of course you canâ€™t win â€˜em all, but 2012 was such a winner overall that I canâ€™t quite bring myself to let it go. But I suppose it doesnâ€™t matter, because, just like Lester, itâ€™s about to drift awayâ€¦ 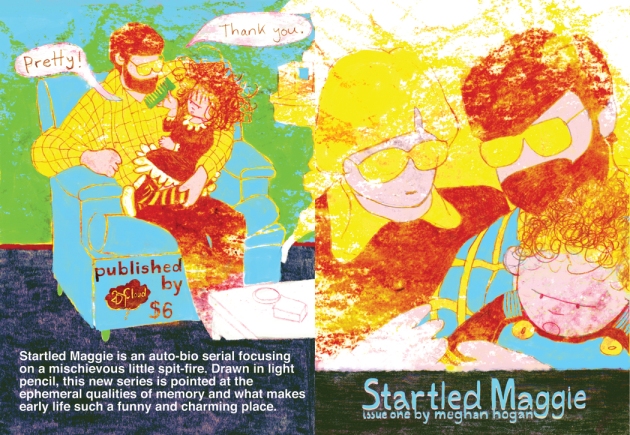